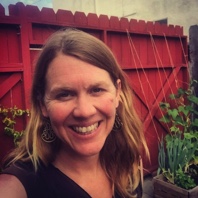 ROCHELLE WATSON is a mother with 15 years experience
as a community organizer. She currently works as National Organizer for Friends of Sabeel North America, mobilizing Christians to act in solidarity with the struggle for Palestinian liberation. Rochelle is passionate about food justice, decolonization and indigenous solidarity. She participated in the direct action that led to shutting down the WTO Ministerial in Seattle in 1999 as well as an attempt to achieve similar goals during the G8 summit in Heiligendamm, Germany in 2007. She co-founded the Olympia
Rafah Sister City Project after her friend, Rachel Corrie, was killed by the Israeli military in 2003 while protecting a Palestinian home from being demolished. Rochelle spent 7 months in Oaxaca Mexico during the 2006 People’s Uprising and has volunteered for the Fray Bartolomé de Las Casas Human Rights Center as a human rights observer in a Las Abejas community and in the Zapatista Caracol of Morelia. In 2010 Rochelle co-founded Olympia BDS, which led to Olympia Food Co-op becoming the first US Grocery
store to boycott Israeli goods. She loves to garden, make pottery and wander aimlessly in wild places.