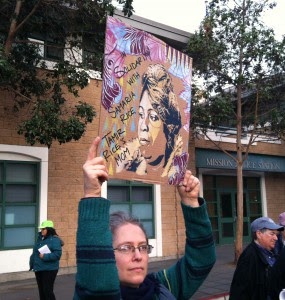 RAHULA JANOWSKI was born on a commune and grew up poor in rural, economically depressed  Northern Vermont. She moved to California in the early 90’s and became involved in direct action organizing and activism, primarily with Food Not Bombs and Earth First!  For most of the 90’s Rahula was involved in direct action, anarchist based organizing on the west coast.  Following the global justice movement’s shut down of the World Trade Organization in Seattle, November 1999, during which she coordinated the legal support office, like many of her anarchist comrades Rahula sought to increase her knowledge and skills around anti-racist organizing.  She participated in the Challenging White Supremacy workshops, and then, following the attacks of September 11, joined the Heads Up Collective, an organization of white anti-racists focused on solidarity with organizations of people of color and on supporting anti-racist development among white activists and organizers.  As a member of Heads Up, Rahula focused on Palestine Solidarity work and developing Heads Up’s vision and strategy with an emphasis on developing and supporting white working class leadership.  Rahula has worked closely with the Catalyst Project for years, in sister organizations such as the Heads Up Collective and through supporting the Anne Braden program as a mentor to participants and as a member of the Braden Leadership Team.  Rahula enjoys talking about race, power, and anti-racism in unexpected places, like her child’s school’s PTA, the grocery check out line, or in her spiritual community.  She is a trained mediator and facilitator and enjoys group process and working collectively to engage and resolve conflict.  She enjoys doing crafts with her excellent 12 year old, reading liberatory speculative fiction, smashing the patriarchy, growing plants, and long walks on the beach.