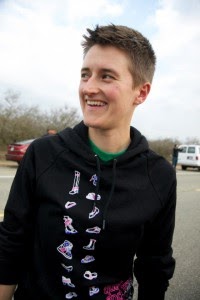 DYLAN COOKE
After participating in the 2011 Anne Braden Program, Dylan joined the Braden Leadership Team in the spring of 2013, and came on as Catalyst staff in the fall of 2013. While growing up in the Bay area, Dylan became politicized as a teen through being friends with queer teens who were homeless and seeing how many barriers they had to accessing the basic things they needed. Dylan has organized around homelessness and housing, prisons and imprisonment, anti-violence, queer and trans community building, and decolonization/indigenous solidarity. After living in Vancouver, Dylan moved back to the Bay Area to be closer to family. Dylan was involved in the Occupy/Decolonize movement, using some of Catalyst’s Occupy Movement Toolkit.