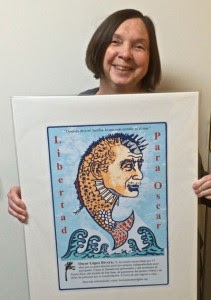 DONNA WILLMOTT’s political roots are in the militant, anti-imperialist organizations of the 1960s, working to end the war in Vietnam, supporting Third World liberation movements at home and abroad, and challenging patriarchy in its many forms. The movements for Indigenous sovereignty and self-determination for Black people have been foundational to her understanding of what it takes to build a truly transformative movement for social justice. Donna was incarcerated in the mid-90’s for activities in support of the Puerto Rican Independence movement. Since her release from prison she has worked to end the prison system and its devastating impact on families and communities, particularly communities of color. Most recently she was part of collective efforts to amplify the voices of California prisoners leading a movement to abolish solitary confinement. She continues to work for the freedom of political prisoners, many of whom have been in prison for 30 or 40 years. Building an intergenerational movement for collective liberation is a high priority for her. She was a mentor in the Anne Braden program for several years and was on the Braden Leadership Team in 2015 before being invited to join Catalyst’s collective.