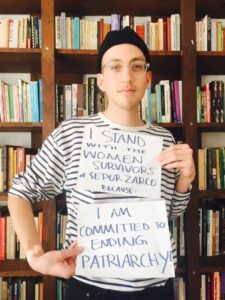 DAVID IMHOFF was a participant in the 2018 Braden Program and served on the Leadership Team in 2019 before joining the collective. David grew up on Susquehannock Territory in rural Pennsylvania, where he attended his first protest at the age of five, joining his parents and neighbors in defending their farms against flooding from a proposed hydroelectric dam. David’s early politicization was rooted in his opposition as a teenager to the US wars in Afghanistan and Iraq and his experiences growing up queer in an overwhelmingly conservative Christian community. He started organizing in York and Lancaster, PA in 2007 as a member of Students for a Democratic Society and Food Not Bombs before moving to the Pacific Northwest, where his commitment to feminism, queer liberation, anti-capitalism, and anti-racism deepened through his involvement in the DIY/punk scene and as a volunteer with a radical childcare collective supporting parent-led welfare and economic justice organizing.

For the last five years, David’s work has focused on cross-border organizing aligned with anti-imperialist social and environmental justice struggles in Guatemala as an international human rights accompanier, grassroots fundraiser, and national coordinator for the Network in Solidarity with the People of Guatemala (NISGUA). Working alongside indigenous and campesino environmental activists and survivors of US-backed genocide in Guatemala has been deeply instructive to David’s approach to social change work and his desire to contribute to internationalist movement building at the intersections of indigenous sovereignty, climate, racial, and immigrant justice. David enjoys writing, cooking and eating, spending time with his cat, watching horror movies, doing music, and putting his body in the nearest body of water.