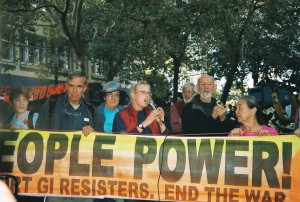 CLARE BAYARD has organized in grassroots movements, led trainings and political education for over 20 years and co-founded Catalyst Project and several other organizations. Clare has worked in many coalitions, organizations and campaigns in movements including migrant rights, global justice, housing rights and anti-displacement, anti-war and Palestine solidarity, conscientious objection and G.I. resistance from within the military, climate justice, and post-Katrina Gulf Coast Reconstruction. Clare believes in the power of mentorship and necessity of supporting each other’s continued growth as community leaders for change, and helps run our intern and volunteer program. Clare leads Catalyst’s anti-war and demilitarization work, and has served on the National Committee of the War Resisters League since 2005, building connections between racial and economic justice struggles in the U.S. and international anti-war work. Clare is from a family with several generations of military veterans, and works on issues of US and international demilitarization as a member of the War Resisters International network and War Times/Tiempo de Guerras, as well as working closely with Iraq Veterans Against the War and Civilian-Soldier Alliance. Clare’s writing has been published widely including Left Turn, the Guardian UK, Z Magazine, Alternet, Common Dreams, The Hill, and the recent anthology We Have Not Been Moved: Resisting Racism and Militarism in 21st century America. Clare loves peoples’ resilient spirits, gardening, horses, and building many different forms of family.